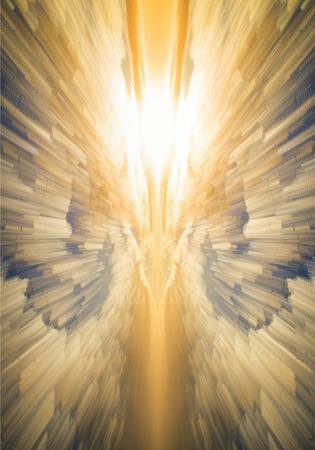 What is golden light ascension energy?

It all began with a series of dreams last June. Golden Light Ascension Energy made itself known to me in a dream that repeated on three consecutive nights. While I have been drawn to angels and energy healing, this energy, golden light, has resonated with me for some time. I have been aware of it as a magnetic presence I would delve into one day. When I was born, a stranger gave my mother a card with a yellow flower on the front and inside it was inscribed, Welcome to your golden daughter. I would stare at this card in my baby book from time to time and it would give me comfort and reassurance that the earth was a place of welcome and a place of golden possibility. One of my earliest memories is of a beautiful man who radiated a golden glow sitting with me in my crib and walking with me to preschool. I became aware at some point that no one else saw him.  In my first day of Sunday school, I saw his picture and realized he was Jesus. I have been clairvoyant and able see divine beings of light since my childhood. Today, I am an angel intuitive and love to help people connect to their intuive gifts. I have been aware of an incredible golden angel, Archangel Christiel for the past five years when he showed up as a luminous glowing figure by my bedside. He announced that he was ‘arriving’ on the earth plane because the light quotient was high enough to hold his vibration and people would soon become aware of him. He was here to bring us into Golden Ascension or the Golden age and while the earth was in a highly polarized state. Light is more powerful. When people connect to it and anchor it in, they radiate light that connects at the heart level and it increases the bandwidth of light on the earth.

Christiel was so very hard to ignore. His golden light is the light of God. It transports you to source and allows you to connect to the fullness of your soul in one breath. He shared that I would be holding a bandwidth of light that was like a golden rainbow and as a golden light holder I would be teaching golden light to others and many other people would join me in this.

I had been practicing and teaching Rainbow Energy Healing, a wonderful modality. and finally opened my own yoga studio wellness center in March 2018. Christiel is also the twin flame angel and works with twin flames here move into union and embrace their shared purpose or mission. Twin flames tend to connect to and hold golden light very powerfully. To connect with Christiel in the dream state or to experience his presence in the waking state is sublime. He truly helps you step into your power and often asks you to fulfill certain tasks that seem like massive leaps. But once you commit to it, he is there to help support you, bolster you, and bring abundance to you. He truly is an angel of miracles.

Back to the dreams. The dreams were incredible because in the dream state he gave me clear instructions about what the steps involved in a golden light ascension session. He did this miraculously and perfectly for me by lighting up the points that I was to touch throughout the session. He showed me one session and explained that it would be largely hands on with the client fully clothed sitting in a reclined position. He explained that while many healing modalities had become largely hands off, that many people were starved for touch, and that gently touching key energy points would activate deeply thereupetic physical and emotional release and create relief of physical symptoms. He also explained that what the session was actually doing was bringing through the client’s new golden light body, an mini-ecosystem of light that would help the person connect to his or her highest global life purpose or twin flame mission. People were falling ill because they were not connecting to their mission of divine life purpose or the joy they were meant to embrace. This session also connects the client to his or her twin flame, soul group, and monad (or super sized monad) which is essential because how people heal is changing. As we ascend we begin to flow and become more interconnected with the souls most aligned with us. We can also effect powerful healing for those beings most connected with us. So to heal is also to share that healing with those who are open and willing to receive.

He then showed me a second session conducted with the client fully laying down which would complete the golden light body and connect the client with the energy of the five golden avatars or golden souls who are being born on earth to hold different qualities of love. I have had some gifted friends assist me on the way to give me confidence to step into the light. I  have had the joy of teaching my first Golden Light Ascension Energy class to a group of six incredible energy healers in the summer. Watching them conduct the very first golden light session was one of the most beautiful sights I have ever seen. As I watched them work in sync, I felt the incredible golden threads of light connecting this powerful group and all of the beings each one of these light holders would connect with over the course of their lives. It brought tears to my eyes and I heard Christiel say, “This is your dream come true.”

Call on Christiel the Golden Angel when you have a dream that you want to come true with all your heart and know that if it is aligned, he is the angel to bring it to manifestation.